I woke in the early hours, accustomed now to the baboons, the new acoustic was more impressive and significantly closer to home. The distinctive laugh of the hyena shot through the night and it was very close. Thankful for the thin canvas walls, I slowly drifted off back to sleep glad I had taken it easy on the beer at sunset and I wouldn’t need to brave a visit to the loo. 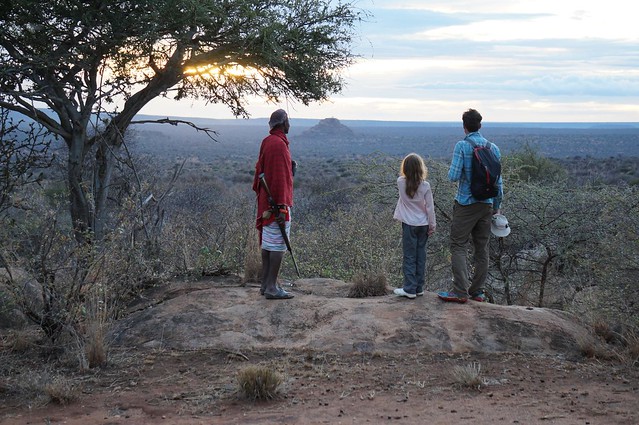 I’ve always been attracted to wild spaces and heading out on foot into the bush has been high on my bucket list for some time. I like luxury as much as the next person, but more than luxury, I crave wild places. On a safari, in a way, the wilderness and lack of other tourists is the one true luxury above all others. To walk the land, camp in wild places and share the bush only with the wildlife is a visceral experience, completely without pretension, that puts you at the very heart of the experience, rather than merely an observer.

A walking safari requires patience, but when you do finally spot wildlife, it is infinitely more rewarding than on a game drive. In a honeypot such as Ngorongoro Crater or the Masai Mara, your driver need only lend his ear to his 2 way radio, and he’ll whizz you to the latest big cat sighting, jostling you for position with the other drivers beckoned by the call of the radio. Here things happen much slower, but when they do, wow. You’ll cautiously track, carefully staying downwind, analysing spoor – and then finally, peaceful watchful observation, just you and your vastly experienced Samburu guide whispering in your ear, no one else around for miles. You are very much in their environment and the wildlife are very much in yours. 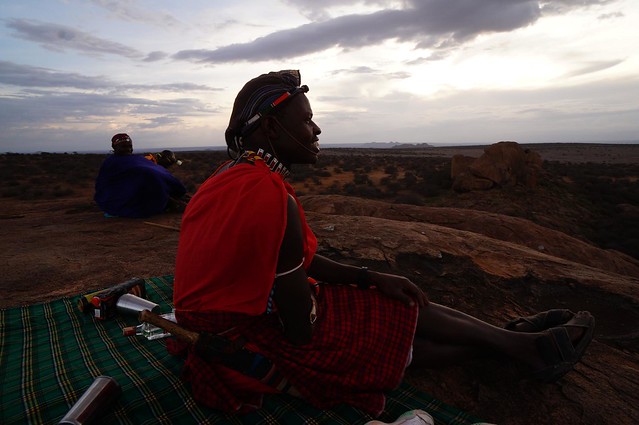 Before we go too Ray Mears, I need to admit that this is an undertaking not without its comforts. Mattresses, bucket showers, superb bush meals in artfully chosen lookout spots, cold beer sundowners and even private toilet tents are the order of the day. This isn’t exactly camping light, but still, this is as close as you need or probably want to get. With 8 year old in tow we weren’t keen on mega miles and the route was in keeping with that. 4-5 hours gentle walking through the bush, stopping frequently to inspect spore and pull out the binoculars to identify mostly fairly skittish wildlife. We were experts by the end of the 4 days, and could easily identify zebra poo from giraffe poo, hell we would even pick out a Grevy’s zebras’ footprint from your more common Plains zebra. Camels are on hand for the children to ride should they tire and they don’t half provide a good vantage point high up there. The 8 year old though was keen to prove her mettle and make it all the way on foot. 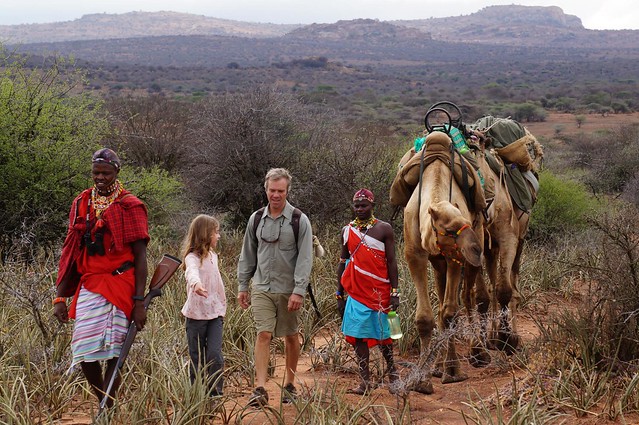 After breakfast we’d set out through the bush, taking time to detour whenever we saw anything of interest. We saw giraffe and zebra, a tortoise crossed our path, but for the most part the wildlife is very shy of humans on foot. We followed the tracks of hyena which had passed through only moments before and eventually we saw them dart off through the bushes. We stumbled upon wild hunting dog – a real treat in this part of Kenya, the adults were out hunting, leaving behind the young with a ‘babysitter’ who understandably was very wary of our presence, we swiftly backed away so as not to disturb. Finally we passed downwind of a small herd of elephant, being careful to stay well clear.

After the walk we passed a slow relaxing afternoon at our next camp, before heading out for a sundowner. They say the beer tastes better the better the view and the harder to reach, and I’d find it hard to disagree with them. 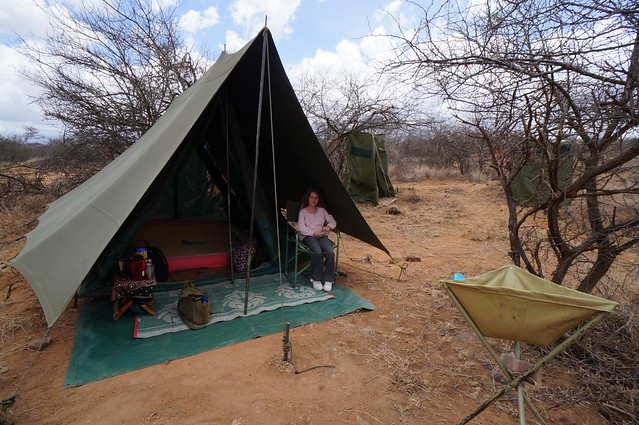 We partner with Karisia Walking Safaris, who operate on the Laikipia Plateau in Northern Kenya. Run by experienced explorers Kerry & James, this is the ultimate safari adventure, with exceptionally experienced walking guides. Treks are tailored, with easier or more challenging routes depending on whether it is an adult or family group. Karisia’s Samburu guides are exceptional, some of the best we have experienced in Kenya. An advantage of walking safaris over game drives is in the quality of the guides. To confidently take guests out into the bush with all the dangers that represents, you need a guide who has not only studied the wildlife, but who knows how to read the bush.

Tourdust Recommends: Combine with some pool time and a game drive at El Karama. If budget allows, combine with the Mara and Coast (Kenya or Zanzibar)

Need to know: Walking safaris operate year round, although expect there to be some rain during the long rains in April / May and short rains in November.

For Families: Families in particular are well looked after. Kerry & Glen the owners live themselves under canvas out in the bush with their own children and tweak the walking safaris to suit families. Having the camels to ride is a major advantage for children who don’t always have the same enthusiasm for covering miles underfoot and the guides are well used to dealing with children. For a family of four the rate works out roughly equivalent to that at a good mid-range safari camp and is surprisingly affordable (as far as safaris go). This is arguably the ultimate family adventure, guaranteeing bragging rights for your kids, an experience that will undoubtedly have all members of the families away from their devices. Because the experience is so tailored and always private there are few restrictions on ages. The minimum age for children is 4 years old, but this is something we would usually recommend for families with slightly children older than 7 and is ideal for families with teenagers.

Safety: Karissia don’t operate in an area heaving with predators, so walking here is much safer than in a densely populated wildlife area such as the Masai Mara. You are in the hands of exceptionally experienced guides. 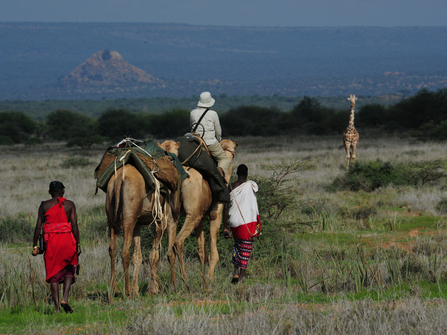 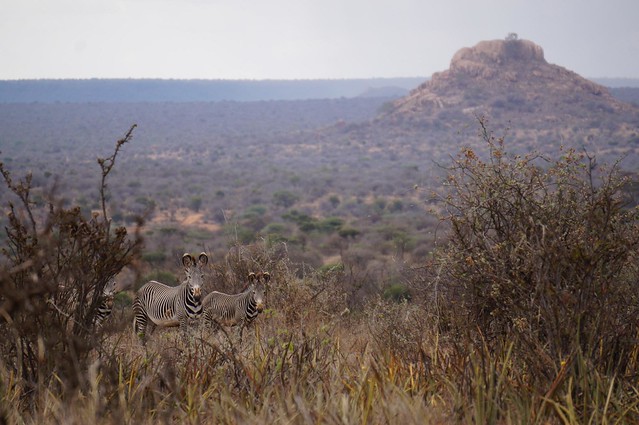 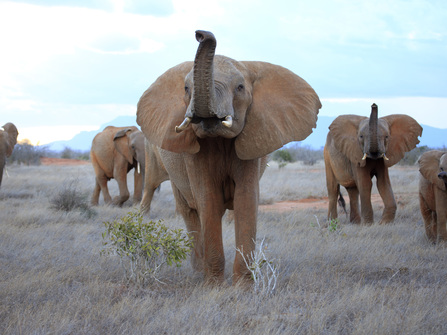 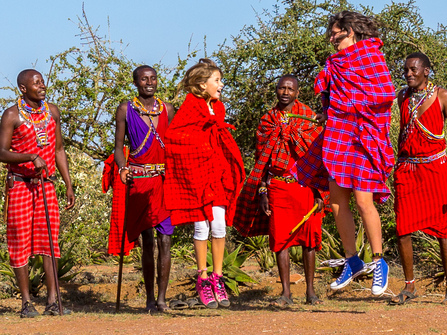 Our best value family safari in Kenya with a balance of safari, activities and culture in the Rift Valley and Masai Mara